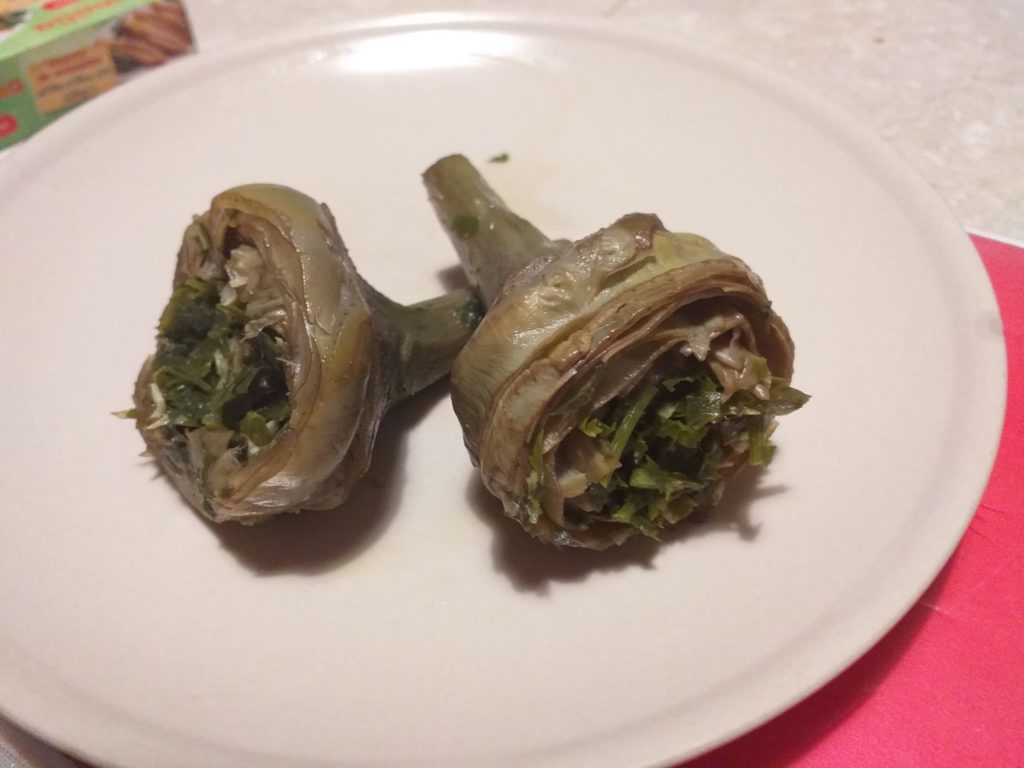 Rome’s favourite vegetable, the artichoke, is at the end of its season, but I just had to cook them once more, because we won’t see them again until September. The most famous artichoke dish in Rome is Jewish Fried Artichokes, deliciously crunchy on the outside, soft and melting on the inside. Roman Style Artichokes are not fried, but gently braised with Roman mint and garlic. The key to this recipe is the preparation of the artichokes; you must remove all the fibrous parts so all of the vegetable that goes into the pan is entirely edible.
Carciofi alla Romana – Roman Style Artichokes
6 artichokes stems included cleaned and halved, buy the most tender artichokes you can find
2 tablespoons chopped Roman mint, calamint and or flat leaf parsley (see note below on the herbs)
2 cloves large of garlic chopped
2 tablespoons of extra virgin olive oil (evo)
1 cup water, lemon juice

Method
Prepare the artichokes by removing the tough, outer leaves from the artichoke until you reach leaves that are pale yellow. Slice a good part of the tops off, too. You will need to cut out the choke (the furry white bit in the middle) if your artichoke has one. If you leave them whole (as per tradition), you will need to bore into the centre with a small paring knife. If you are not confident with this part, cut them in half and you will see exactly what you need to remove. In the photo, the left half has the choke removed the right, no. If you’re not sure how much to cut off, my advice is to be ruthless; a smaller artichoke is preferable to a fibrous, inedible one. You will need to pare back where the leaves were attached and peel off around 3mm from the stem, too. Put the artichokes into bowl of water that has some lemon juice squeezed into it while you prepare the others.
In a small bowl, mix the herbs and garlic together. Stuff this into the centre of the drained, whole or halved artichokes. Heat the evo in a pan, just big enough keep the artichokes close together. Put in the artichokes and add a good pinch or two of salt, then the water. Once it has started to gently simmer, turn down the heat and cover the pan. Cook gently for 20 – 30 mins, the cooking time will depend on the freshness of your artichokes, and their size. (Mine were old and big and took nearly 40 mins). There should always be at least 1cm of liquid in the pan, so top up the water (or use vegetable stock or even a little white wine) if too much evaporates, and cook until the artichokes are tender. Buon appetito!

Note on the herbs
There is much discussion on whether the “right” herb to use is menta romana or mentuccia. Both are varieties of mint that are less sweet and more peppery than common mint. They are translated into English as Roman mint or spearmint and calamint. Flat leaf parsley is also used, and not only when mint is hard to find. Some prefer it to the mint. For the batch in the photos, I used and combination of calamint and parsley and I was very pleased with the flavour.