Colosseum: origins of the name 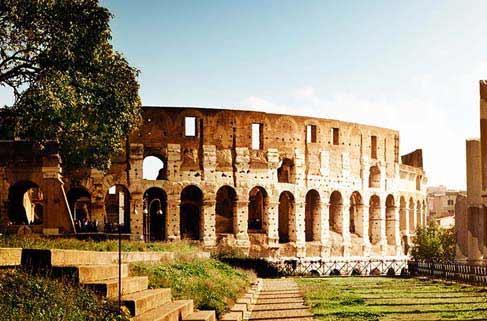 Why is the Colosseum called… Colosseum?
The Flavian Amphitheatre was inaugurated in 80 AD by the Emperor Titus. The present day nickname dates back to the Middle Ages and has been so widely used that it has completely replaced the original name. Colosseum derives from Late Latin word “colossus”. But what is the word “colosseum” referring to? Can it be simply the size of this marvelous and massive structure that dwarfed the tiny medieval buildings that
surrounded it? No one can say for sure.
The most widely accepted explanation is due to a giant statue of the Sun god “Helios” with the facial features of the emperor Nero that stood over 100 feet tall and was placed in the vicinity of the amphitheater.
Mixed with fact and fiction are also the legends surrounding the origin of the word itself. One of our favorites tells
that the amphitheater was believed to be built by the devil himself and upon entering the structure, the question “Colis Eum?” (“Do you worship him?”) was asked. From Colis eum to today’s Colosseum.
Find out more on our Colosseum Tour.