Ostia Antica, what to see and how to get there 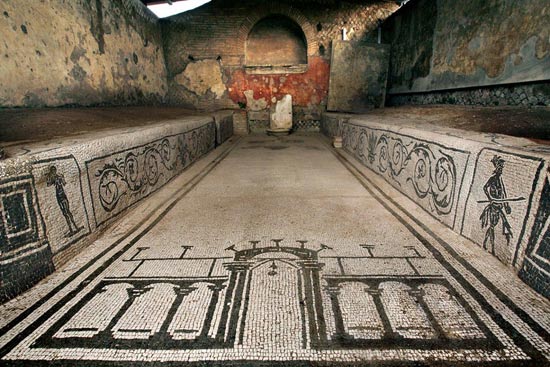 One of the most beautiful and interesting excursions to do from Rome is to visit the ancient city of Ostia Antica. The ruins of this important Roman port city rival its more famous and crowded cousin, Pompeii. It’s the perfect place to get an idea of what life was really like for Romans as you stroll around the apartment buildings, down the main road, admire the mosaics, visit the bars and temples and enjoy the shade under the umbrella pines just as they did.

When Rome was the most important city in the world, for over 600 years, Ostia was its major port. People from all over the Roman world with different religions and languages lived in cosmopolitan Ostia. The city was originally located on the Tyrrhenian coast at the mouth of the Tiber River (ostium means river mouth in Latin) hence the name Ostia. Over the centuries, silt from the river altered the coastline, now 2 km away, and covered the buildings of Ostia. Today the archaeological area is below the level of the river and surrounded by high embankments.

Livy tells us that the city was founded in the 7th century BCE by the fourth king of Rome, Ancus Marcus who set up salt works there. It became a military base in the 4th century BCE, and the earliest archaeological evidence comes from this period. As Roman commercial interests began to expand so did Ostia and its role as the port city of Rome.

Now an important seaport, Ostia experienced a building boom that led to great prosperity. In the 1st century CE, the Emperor Claudius created a deep-water harbour (Portus) a few kilometres north of Ostia, this transformed Rome’s access to Mediterranean trade. The city was largely rebuilt during the late 2nd century CE when reached its peak with a population of over 75,000 people. Although archaeologists have found buildings and artefacts from different historical periods, the overall aspect of the town that we see today is that of the 2nd and 3rd century CE. The city was driven into decline by malaria, commercial competition and the fall of the Roman Empire, it was completely abandoned by the 9th century CE.

You enter the excavations through the Porta Romana gate and you will be at the start of Ostia’s main road, the Decumanus Maximus. This street runs right down the middle of the city. To the left and right of it, you will find some of the most celebrated of Ostia’s ruins like Agrippa’s Theatre, the Baths of Neptune, the Piazza of the Guilds and right at its tip near to the old shoreline, the oldest Synagogue in Europe.

I’d like to tell you a little bit about some of the ruins that are not so well known, but are just as fascinating.

The Baths of the Seven Sages

This was a bathing complex for the less affluent of Ostia, and was probably used just by those who lived close by. The baths are part of a repurposed building and are sandwiched between two apartment blocks. The earliest parts of the building date from around 140 CE when it may have been a market. The most impressive room, the round hall with a mosaic floor, originally covered by a dome, was the frigidarium (cold room). There was a tepidarium (tepid room, mosaic of marine monsters) and a caldarium (hot room) too. The mosaic of a naked man depicts the Bath’s caretaker, Julius Cardo (IVLI CARDI). There is a second frigidarium with a fresco of Venus from the early 3rd century CE.

The baths are named after frescoes depicting the Seven Sages (Greek philosophers of the 6th century BCE) in a small adjoining room that was probably used as a bar. The three surviving Sages are (left to right) Solon of Athens, Thales of Milete, and Chilon of Sparta. Above each of them is a phrase, not on their specialised subjects of law, science and politics, but they are instead advice on defecation! Here they are, translated from the Latin: Solon rubbed his belly in order to defecate smoothly, Thales advised those who shit hard to really work at it and Cunning Chilon taught how to fart silently. Below Thales is another row of figures, sitting together on a communal lavatory, giving advice too. Jump up and down and it will go quicker and It’s coming. Archaeologists have found no fewer than eighteen mithraea in Ostia, the largest concentration of such buildings in the world, so it’s evident that this cult was very popular here. Mithraism was a mystical religion imported into the Roman Empire from Persia that worshipped Mithra, the Iranian god of light. He is often shown with a crown of sunrays or sacrificing a bull. The cult was reserved for an élite and had seven grades of initiation associated with the planets. Mithras was worshipped in long, narrow rooms that had a cave like appearance and benches on both sides; there they had a common meal and attended their rites. It was at its height in the 3rd century CE. There are twelve mithraea (mitreo in Italian) to visit scattered amongst the ruins of Ostia. The Mithraeum of the Seven Spheres, of the Snakes, of the Animals, of the Painted Walls, of the Baths of Mithra, of Lucrezio Menander, of Sabazio, of Fructosus and the four pictured below. The Thermopolium of Via Diana

This well-preserved 3rd century CE tavern, where hot food was served, is decorated with frescoes. The central room has an L-shaped bar that includes a sink for washing up. Closer to the internal courtyard there is another area to display food. In a second room there’s a terracotta vessel called a dolia set into the ground, which probably held wine or water and kept it cool. There is a stove for cooking in the corner of this room too. The marbles that decorate the dining rooms were taken from other buildings. Customers could sit on benches or at the bar and in good weather they could sit in the small garden. How to get there:

Getting to Ostia Antica from Rome is simple and inexpensive. The €1.50 public transport ticket will cover getting to the Metro stop Piramide on line B and the train trip to Ostia; you’ll need a second ticket for your return trip. From the Metro stop Piramide; follow the signs to Lido, which will take you to the platform of the adjacent Porta San Paolo train station. All trains depart in the direction of Lido and leave every 15 minutes. Get off at the Ostia Antica stop and cross the blue footbridge to get to the entrance of the excavations.

The site is open Tuesdays to Sundays (closed on Mondays) and the entrance fee is €10. Often there is an extra charge added when special exhibitions are held. So be prepared to pay an extra €2.

There is a restaurant and museum inside the site, near to the gift shop. There are restrooms here and at the entrance too.