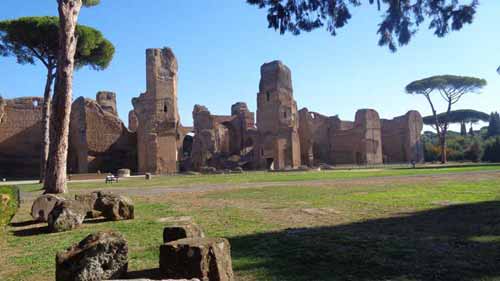 A living testimony to what made Rome the center of the World.

Rome ruled the basin of the Mediterranean for hundreds of years. The empire expanded as far south as the Sahara Desert in Africa and as far north as the city of Newcastle in England. This conquest wouldn’t have been nearly as possible if it hadn’t been for the care and attention the Romans placed into building and maintaining their infrastructure. Roman roads were built initially to move army troops quickly from one province to another and the aqueducts to refurnish the ever-growing population with fresh water. These architectural marvels still stand the test of time and are the reason why we have a little bit of Roman in all of us. While visiting Rome, most tourists crowd the Colosseum and line up to enter the Pantheon, unarguably the best examples of Roman civil engineering but there are plenty of other lesser known structures, off the beaten path, to admire while visiting Rome. Here are few of our favorite sites.

Construction of the walls started in the year 270 A.D. and was completed five years later in 275 A.D. The original perimeter stretched as far as 19 km (12 mi.). The Emperor Aurelian replaced the outdated Severain walls that surrounded only the seven hills of Rome since by the late 3rd century Rome had already grown beyond this ancient enclosure. The Aurelian walls were erected to protect Rome from the ever-increasing threat of barbaric invasions descending from northern Europe and stood strong until the siege of the Visigoths in the year 410 A.D. During the beginning of the 20th century, in order to connect new neighborhoods with Rome’s historical center, a good portion of the walls was demolished. Today, the Aurelian structure weaves in and out of modern-day Rome and yet they are still the longest and best-preserved walls of any ancient city in the world. 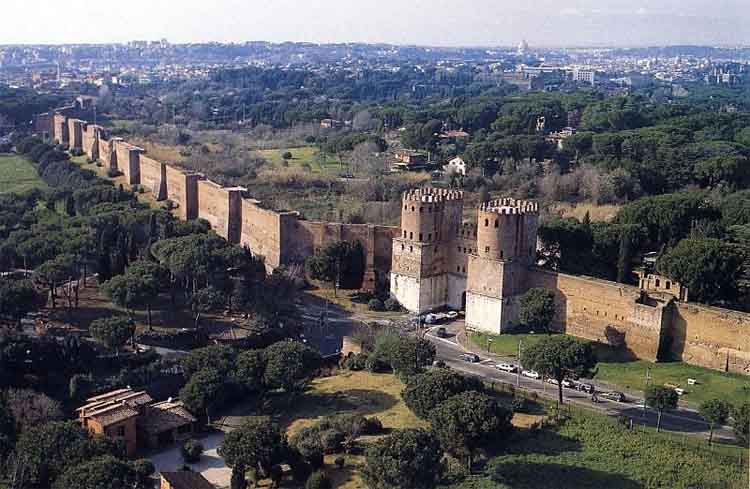 Construction of the Aqueduct of Claudius was actually begun by the Emperor Caligula in the year 38 A.D. and terminated by the Emperor Claudius in the year 52 A.D. The full extension of this aqueduct, from its source in the valley of the Aniene to where it originally ended at Porta Maggiore, was approximately 69 km (43 mi.) having a flow capacity of 2.3 m3 per second (81.2 ft3 per second). Although most of the aqueduct was built underground, a considerable portion can still be admired in the Park of the Aqueducts in Rome. During the Imperial age Rome could count on 11 functioning aqueducts that supplied the city’s fountains, baths and cisterns with fresh spring water. A rough estimate states that each Roman citizen could rely on nearly 900 liters (238 gallons) of water per day, for a population of slightly over one million people. Having access to fresh clean water became a Roman civil right 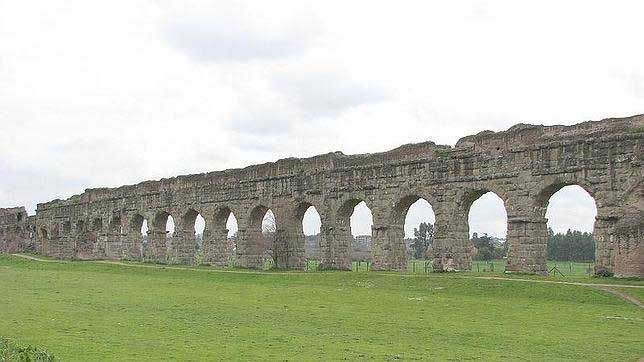 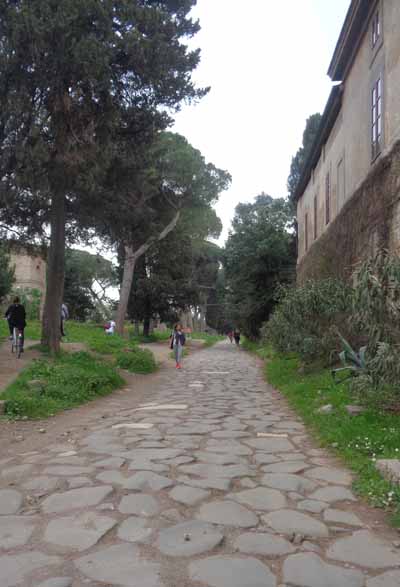 “All roads lead to Rome” says the famous idiom and it all began with the Appian way built in the 4th century B.C. by the consul Appius Claudius. The purpose of this main road leading south of Rome was to move armies and supplies quickly in the territory controlled by the Samintes who were at war with Rome. The first part of the Appian road, from Rome to Capua, was started in the year 312 B.C. and covered nearly 200 km (124 mi.) The road was further extended all the way to Brindisi in Puglia by the Emperor Trajan in the beginning of the 2nd century A.D. making the complete extension 540 km (365 mi.). Per ancient Roman custom, burial grounds had to be located outside the walls of the city and along the Appian road various ruins of mausoleums, tombs and catacombs align either side of the pathway. Even Napoleon had his military engineers study the straightness of the Appian road and replicate its perfection at Champs-Élysées in Paris. The Appian road is often referred to as “Regina Viarum” meaning “queen of roads”.

The Baths of Caracalla were started by the emperor Septimius Severus and completed only later by his son Caracalla in the year 216 A.D. One of the largest and best-preserved thermal complexes of the ancient world, it had the capacity for 8000 people to use its various services daily. The “Aqua Nova Antonine” aqueduct was specifically built to refurnish and supply this massive complex with fresh water. It had shops, gyms, two libraries (one for Greek and the other for Latin texts), changing rooms, a stadium, and multiple massage chambers. The guests could choose between cold baths (frigidarium), warm baths (tepidarium), hot baths (caldarium), and a giant waist deep swimming pool (natatio). In most cases the baths were available for a small fee but there were occasions in which the emperor in power would grant free entrance to everyone. Romans from all social classes flocked to the baths whenever they had a chance. Not only was it a place to relax and bathe but let’s not forget that most Romans didn’t have a bathroom at home. “Mens sana in corpore sano” or “a healthy mind in a healthy body” became a motto to which the Romans lived by and this was possible thanks to structures such as the Baths of Caracalla.