From Lupercalia to Saint Valentine 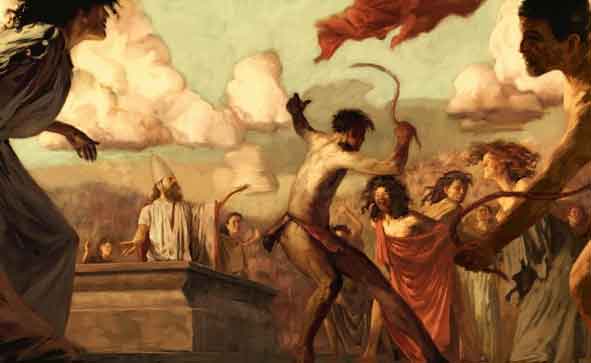 The 14th of February is a day dedicated to lovers all around the world and to the celebration of all forms of love. But where did this festival originate from? If we take a step further back in time, we will discover an ancient and fascinating festivity known as the Lupercalia, celebrated on the night of the 14th til the whole day of 15th of February.

What was the Lupercalia?

The Lupercalia was a ritual of symbolic purification and its origins could derive from the cult of “Faunus Lupercus” a divinity of chaos and wilderness usually represented as Pan.
The celebrations began at the foot of the Palatine hill where in a cave priests of the cult of the Lupercalia bathed and prepared a mixture of honey and goat’s milk. Afterward a whip made of sheep hide was immersed into the mixture and then the priests ran out of the cave whipping and flogging everyone they encountered.
Plutarch, a roman historian, describes these ritual as “very difficult to explain.” Even the famous lawyer Cicero writes about noisy and savage parades throughout the city.

By the 5th century the Lupercalia festivities as for most pagan rituals were outlawed by the Catholic church. Pope Gelasio dedicated the 14th of February to Saint Valentine who was martyred in Rome by Emperor Aurelian in the year 273 A.D. Saint Valentine’s personal history remains shrouded in mystery as different historical accounts barely mention him. Tradition says that Saint Valentine was a very influential priest and was imprisoned after celebrating weddings amongst his community, violating an imperial law that forbid marriages between Christians. Another curious anecdote says of a young Saint Valentine, while incarcerated, fell in love with the daughter of the prison warden and would write her letters concluding with “Your Valentine.”

However Saint Valentine’s name in time became tied to Romanticism and to lovers worldwide.