The forgotten Carnival of Rome 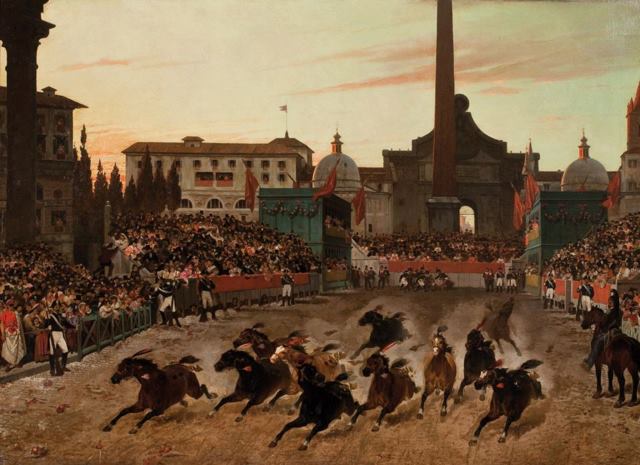 Venice has the world famous masks and fancy costumes, Viareggio has the allegorical parades. Rome once had “La corsa dei Berberi” or Barbary horse race. Since the mid 15th century via del Corso, now the popular shopping district, was designated as the area to have horse races during the celebration of Carnival of Rome.

The noble families of Rome would provide several male horses of barber breed. The horses then would have been decorated with different colored ribbons braided into the tails such as green, yellow, red, blue, purple and so on as bets were being taken amongst the crowd that gathered numerously in Piazza del Popolo.

Trumpets announced the beginning of the race and the people scattered along the side of via del Corso pushing and elbowing each other out of the way in order to get the best spots. When the horses were aligned next to each other the race began. Startled by the yelling and cheering crowd the horses galloped straight down via del Corso and into piazza Venezia approximately 1 mile in length. The noble family of the winning horse received a saddle embroidered with gold and silver but more for the value it was a trophy to be exposed.

Goethe, the famous German writer, assisted the race in 1788 and wrote “ The Carnival in Rome isn’t a festival given to the people but it’s a festival that the people make themselves.” In 1874 due to an accident, a young child was stampeded by the horses, and king Victor Emanuel the 2nd decided to abolish the race permanently. Carnival in Rome since then has lost its glitter.